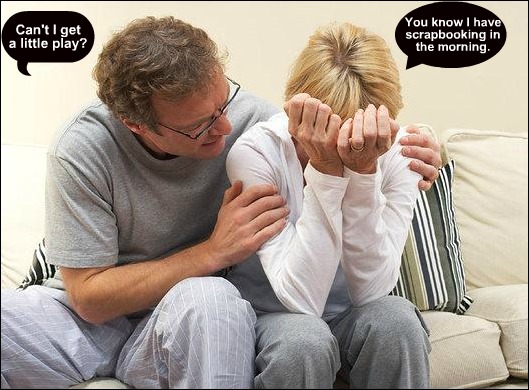 Who does this? Well, it’s a common practice among married evangelicals and is usually performed at the behest of the pastor who did their premarital or crisis counseling.

It’s even common to even hear suggested in a sermon. Unlike high chuch and mainline denominations, Protestant pastors of the evangelical stripe love talking about sex from the pulpit (the married and heterosexual elements always carefully emphasized). The pastor will say “We schedule other important things like quiet times and oil changes. Why not this?” You get the idea that he knows a lot of people in the congregation with near-celibate marriages and you have a sneaking suspicion he’s doing the men a solid.

Christian culture’s take on sex has caused no shortage of self-loathing, book deals, vaginismus and divorce. They aren’t sure how to hold power and danger and carnality alongside personal histories, spirituality and the whole person, so they hedge its pedestal with awed suspicion and then they're bewildered that sex isn’t better. In the grand tradition of Christian culture they once again put the cart before the horse. Not the position, but metaphorically. The wives silently seethe and wield it like a weapon. It’s the best way to exert control over that relationally passive horndog they’re married to. Their church’s Song of Solomon series gets the husband’s hopes up. Maybe she’ll put out if God says to? They resort to scheduling marital congress like the Zondervan books suggested. The husband waits for the appointment panting and wagging. The wife is grateful for each day that isn’t the designated Sex Day and when it arrives she wonders what’s wrong with her. He’s just so eager and unable to connect unless it involves their junk. But the sex date is as good as it gets. At least they’re doing it. A soggy potato chip is better than none at all. Again, this is advice given from the pulpit. Taken at face value (Christian culture's tendency) it’s another way of Doing Things and Avoiding Relationship.
Posted by stephy at 1:13 PM 185 comments: