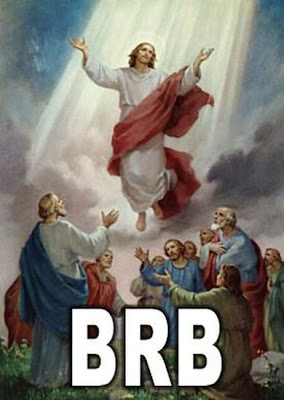 It goes that people who've been waiting for marriage want to have sanctioned sex here on earth before going to heaven. In Christian culture it's a running joke that you hope Jesus doesn't return till after you get married. Saying this out loud makes a person in Christian culture feel a bit naughty and worldly while staying safely within a Christian context.

The chances that vestal sexytimes will be mentioned during the wedding ceremony are pretty high among Baptists and non-denominational evangelicals. The pastor is likely to make a statement such as "They completed the difficult task of waiting and now they will enjoy the rewards on their honeymoon," "They have honored their purity and tonight is the night!" or "Jessica has saved her virginity for Nick." As odd as it is that the couple's maiden boning voyage is referenced during a holy marriage ceremony, a random and senseless act of good taste does occur: if the groom did not wait for the bride, this is never mentioned. 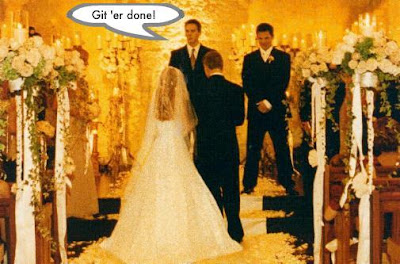 The subject of the wedding night is never broached during Catholic, Episcopalian, Lutheran or Methodist weddings. It occurs strictly in less liturgical, evangelical settings.
Posted by stephy at 10:33 AM 84 comments: 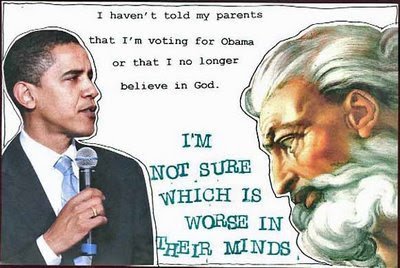 With Barack Obama as president, Christian culture is certain the end times are upon us.

*The "end times" are the eschatological writings which depict a time of tribulation that precedes the return of the Messiah, i.e., what the Left Behind series was about.
Posted by stephy at 7:11 PM 84 comments:

#90 Being pro-life while simultaneously supporting the war 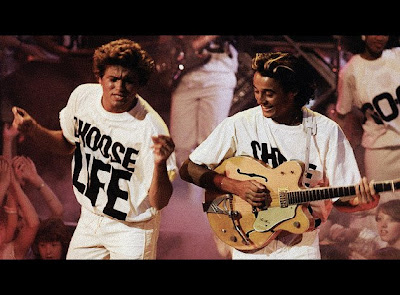 One of the tenets of Christianity is that life is sacred. Because of this Christians oppose abortion. They could talk about it till the cows come home.

By and large, people in Christian culture also support the war in Iraq. The considerable loss of innocent life during war doesn't seem to strike them as any sort of inconsistency. 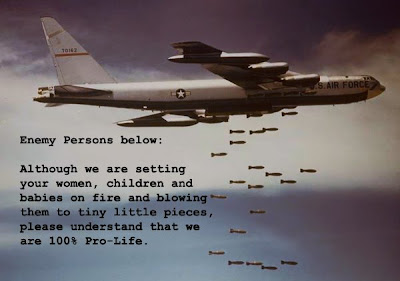 Christian culture isn't big on entertaining the notion that their political views could be anything other than what God has decreed. Abortion and war aren’t very savory subjects in the first place. They become more palatable when we form black-and-white views on them (from either political side) and cling to them unflinchingly. This often happens at the expense of relationships with whom we disagree. But Jesus taught that relationships and love are a priority, and that politics aren't of much consequence.

It's a lot easier to place issues in a box (whether they’re liberal or conservative) and deal with them remotely, without engaging the people who hold them.
Posted by stephy at 3:26 PM 263 comments:

#89 Saying "It's a God thing" when something good happens 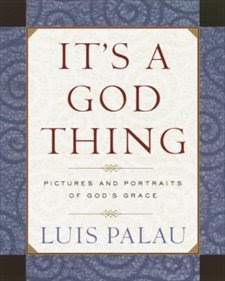 "It's a God thing" is a phrase frequently spoken in Christian culture. It is always said in response to something good that has happened. 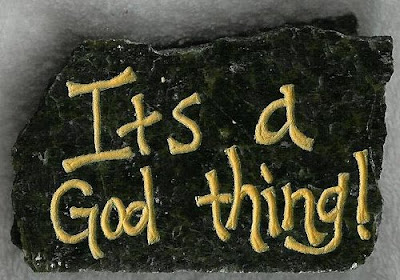 "It's a God thing" can be said about anything perceived to be good such as miracles of healing, finding a parking space, or Proposition 8 passing. 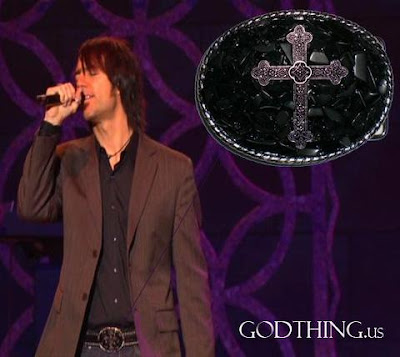 It is not said when something bad happens. When met with bad news, you are more likely to hear someone say "It was God's will."
Posted by stephy at 11:29 AM 754 comments: 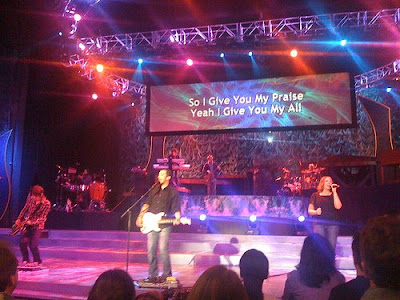 When your church building is the size of Old Navy, how else are you supposed to see what's going on down front? 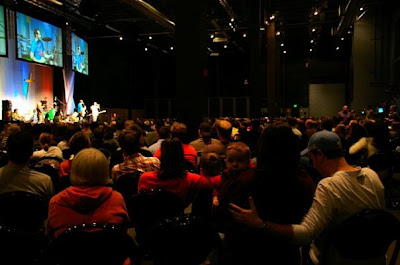 But big screens are not limited to warehouse churches. Smaller-scale churches within evangelical culture now have projector screens so lyrics to the songs can be displayed via PowerPoint. 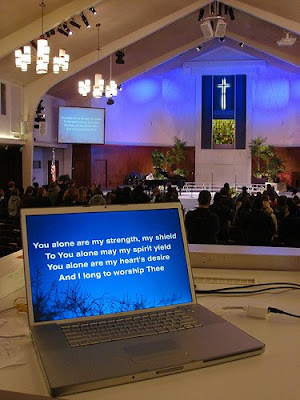 As churches work to "appeal" to a "younger demographic," the hymnal is going the way of the landline. In these churches a worship team leads the congregation in some extended anthems to Jesus in which the word "I" is used a lot. A PowerPoint display helps you know which words to mouth even if it can't help you with the tune. 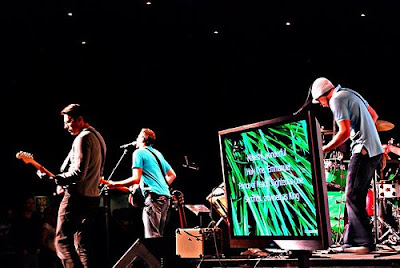 Jumbotrons are also necessary at churches that have multiple campuses. (A multi-campus church is one that owns many buildings and the pastor's message is telecasted as people assemble to watch. When you gather in a building with other church members to see your pastor speaking on a screen from a remote location, there is a .0042% chance you would ever be granted a meeting with him in person.) 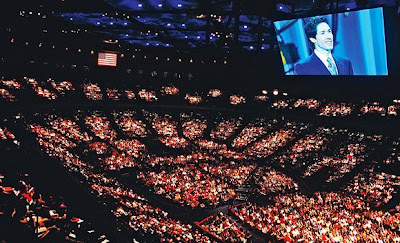 Bucolic and otherwise "inspirational" backgrounds are brandished on the screen(s) between worship songs. Oftentimes the background will display one word that is presumably intended to inspire the congregation. 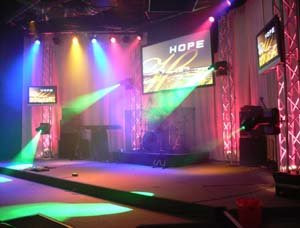 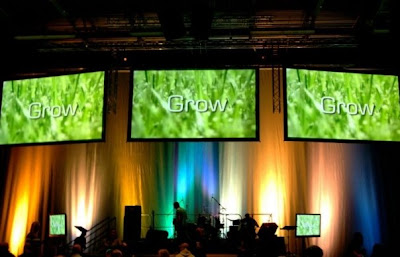 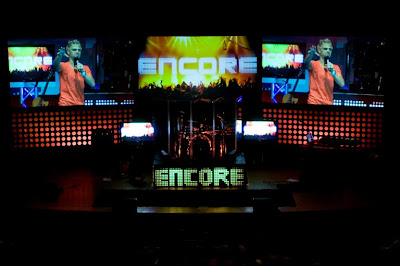 These screens are also necessary for the videos that are sure to be displayed. Videos are gaining popularity within Christian culture. A church video is often produced by the church's creative team who works closely with the worship leader and features lots of smash-cuts and white flashes set to Christian music that sounds like Nickelback. (Although they want it to sound like Coldplay.) The purpose of a church video is usually to tell an inspirational story or to get you "pumped up" for worship. 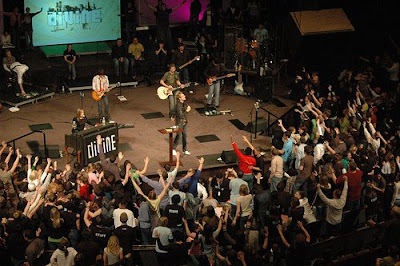 In some instances churches will hold a service for "traditional" worship (always the early service) and the ensuing services will be "contemporary." This is to please members of the congregation on both sides of the generational gap. The nuances of these two services will be discussed further in a future post. 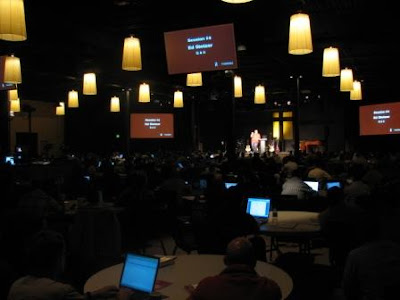