my religion podcast with david bazan from pedro the lion 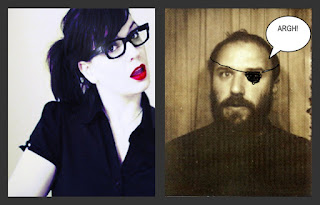 Non-blog-post post: Last week I was on a special religion episode of the Grapes of Rad podcast with David Bazan. He was my Bible study leader ten years ago and isn't a Christian anymore, and we talked about that and the ways that being preacher's kids (which we both are) have come into play. In Part One we all talked about leaving our faith and growing up as preachers' kids and why Newt Gingrich has a chance in hell, American Girls, non-practicing evangelicals (which Dave identifies as), questioning, hating, bitterness, grief, Joseph Campbell, how not knowing is scary, and I also told the story about how Carman grabbed my ass one time. That was in part one and it is here.

In part two we talked about Santa’s influence on Bazan’s view of God, masturbation, how I was in a Dr. James Dobson video in 1991, grief, Christians and therapy, WALL-E (twice!), using “Bug Me Bucks” to deal with ideological clashes at family gatherings, tits and ass, how Aaron and I met at one of Bazan’s Living Room Shows, underdogs and Malcolm Gladwell, abandonment and those you turn their backs on you if you stop believing their religion, Morning Loaf with The Rev. Jeff Breakfast, how being a parent changes things, Bazan and I both attended the same church for awhile, sex scandals with pastors, and leaving church. So part two is here.

It was weird being so open about crazy personal stuff but I hope it helps people, maybe. It'd better or it's all for nothing! Ha.
Posted by stephy at 4:34 PM 106 comments: