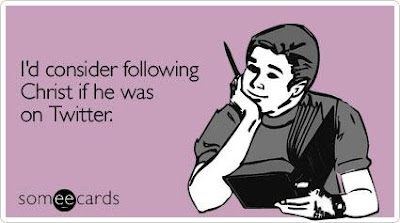 Churches are excited about Twitter. It’s what the kids are doing these days, so many churches have launched campaigns encouraging people to tweet during services. This might be the new version of being allowed to pass notes during class, except your device carries more status. iPhone? Niiiice! Basic Nokia piece of crap that was free with your plan? Pfft. (Coffee consumption whilst tweeting scores you extra relevance points.) 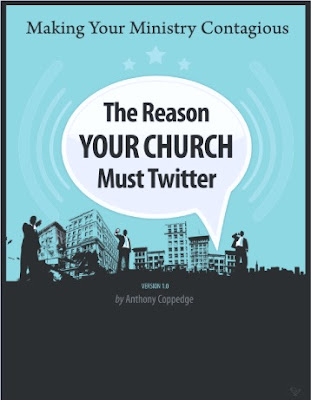 96% of blog entries written by a pastor (or his tenebrous cousin, the creative pastor) on the subject of Twittering follows this trajectory:

“In my church, I have seen life-altering small groups formed and forged through Twitter.”

“I have seen teams of people mobilized to do volunteer service like nothing else in the past through Twitter.”

If someone in the church should have a non-Christian friend (not too likely, but just in case) and that friend should follow them on Twitter, guess what. That person has to read every little thing his church friend writes. But this will only be positive advertising if the person following him thinks that the church tweeter is actually nice, smart, or even better, cool. If Church Tweeter isn’t viewed highly and people are just following your tweets because they want to know where traffic jams are, this might not work out too well for your church numbers.

But all of this begs the question, if you’ve finally found some quiet for the first time during the weekend, do you really want your phone to go off and tell you that Pastor Mark sure is on fire today? And if you’re having a soul experience at church, do you really want to be typing into your phone about it? Can you have a soul experience from reading other people’s tweets about their soul experiences? Are we trying to keep ourselves occupied to distract ourselves from the stillness that could hold something scary? Maybe not, but it’s worth asking.

'There are quiet places also in the mind', he said meditatively. 'But we build bandstands and factories on them. Deliberately — to put a stop to the quietness. ... All the thoughts, all the preoccupations in my head — round and round, continually, What's it for? What's it all for? To put an end to the quiet, to break it up and disperse it, to pretend at any cost that it isn't there. Ah, but it is; it is there, in spite of everything, at the back of everything. Lying awake at night — not restlessly, but serenely, waiting for sleep — the quiet re-establishes itself, piece by piece; all the broken bits ... It re-establishes itself, an inward quiet, like the outward quiet of grass and trees. It fills one, it grows — a crystal quiet, a growing, expanding crystal. It grows, it becomes more perfect; it is beautiful and terrifying ... For one's alone in the crystal, and there's no support from the outside, there is nothing external and important, nothing external and trivial to pull oneself up by or stand on ... There is nothing to laugh at or feel enthusiast about. But the quiet grows and grows. Beautifully and unbearably. And at last you are conscious of something approaching; it is almost a faint sound of footsteps. Something inexpressively lovely and wonderful advances through the crystal, nearer, nearer. And, oh, inexpressively terrifying. For if it were to touch you, if it were to seize you and engulf you, you'd die; all the regular, habitual daily part of you would die .... one would have to begin living arduously in the quiet, arduously in some strange, unheard of manner.' – Aldous Huxley, Antic Hay

"Step out of the traffic! Take a long, loving look at me, your High God, above politics, above everything." – Psalm 46:10, translated from the original Hebrew [it was Hebrew, right?] by Eugene Peterson

but alas, in christian culture, we have been taught that we are wicked and if we are still too long we'll start to become narcissistic. we have to stop thinking about ourselves so much and join a ministry!

Gosh, and here I thought I was the only one that thinks the whole twitter thing is obnoxious and an irresponsible, narcissistic use of time ...

*small voice* I like Twitter. Admittedly, though, I do a lot more reading of others' tweets than I write my own. That's how I roll. *nods*

I have had a habit of turning the radio on at every opportunity including the quiet of the sleepless night (using an earpiece to let my wife sleep) but reecently I've realised I need silence. In that silence I have heard a still small voice leading me on a new adventure. Please don't fill every gap in your life with noise - leave room for God.

P.S. Stephy - you have finally shamed me into the first steps towards blogging. Hugh

The Disorganized Thoughts of a B-type Personality said...

I have just discovered Twitter myself, so don't feel qualified to say, but what?? Am I supposed to sit in church and twitter away to someone across the room? And pastors encourage this? Usually they are trying to get you to look at them and pay attention. I don't get it. I won't do it. I can't anyway, I am disabled and homebound. I would like, however, to be able to get a direct twitter line to the Lord himself. Is that possible?

"Are we trying to keep ourselves occupied to distract ourselves from the stillness that could hold something scary? Maybe not, but it’s worth asking."

Actually, that is exactly the case. If these pastors were really concerned about their people's spiritual growth, they'd tell them to shut off the phones; and they'd have a time of silent reflection after the sermon.

That would be unique. Tho' I do believe I have seen it done right, and wrong, as the spirit leads i.e.: communion reflection at the end of the service is a good time to reflect. Perhaps we could score the sermon's level of leading our inner selves out of the natural realm to the supernatural. 1.I am on the basement step-I think I smell a rat-what was that moving over there? 2.I am only half-way up but at least I have forgotten my lousy job and am looking up instead of back. 3.I think I can see the bottom of the clouds from here. 4. I can see the soles of Jesus' feet. 5.I am sitting at Jesus' feet, I have arrived this time. 6. I had a heart attack and died during the collection. Heaven is beautiful, wish you were here.Amen.

I'm completely ignorant of twitter, but do congregations really encourage parishioners to hack on their cell phone during the service? Wow I guess my church just isn't that cool.

I hate to gripe but wasn't Psalm 46 written originally in Hebrew?

I think you're right, I think it was in Hebrew. Shows how much attention I paid!

Yeah, if you google it you'll find a lot of churches talking about twittering. There was a local news story here a couple weeks ago about a church here encouraging it.

THAT made me spit my coffee out laughing :)

Twitter is a time waster, not an outreach tool :)

My job is on the Internet, so I see the value of Twitter. And it's because of that I dislike the idea of tweeting at a church service. It is far too easy to be 'always on' today. I'd like to think I can go to a church service and relax and hear God.

that is a breathtaking quote!

Antic Hay was a life changing book for me in high school. Thank you for bringing that little passage back to life for me.

I didn't read the Huxley quote because it wasn't 140 characters or less.

I too love the Huxley quote. Sadly, I have not read Antic Hay yet; now I'll have to seek out a copy.

I mourn for all Christians who read little or nothing outside of the King James Bible (or the newer English translations, ick). Like my old roommate. It's so easy for people to stay close-minded if that's all they've ever read. Of course, many have not even read the entire thing for themselves to begin with.

Uh ... Psalms was from the Hebrew, not the Greek. (re: the quote from Eugene Peterson.)

Dammit, you're totally right, the Psalms were in Hebrew and not Greek. maybe some Aramaic. I don't know. Thanks for finding that. :)