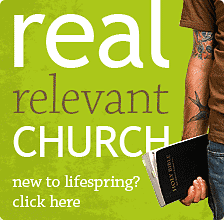 Churches want to attract people. They want to be cool. They seem to think the message of Christ is not enough on its own, it must be accompanied by worship music played to tracks, preachers who offer sermon series such as "The Pathway of Peace," and services that last 58 minutes. (Other words in the relevant lexicon include "emergent," "resurgent," "missional," and "authentic.") 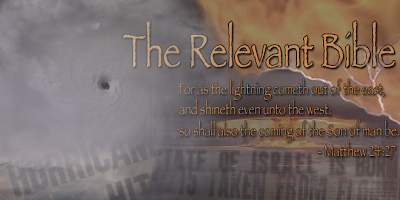 Pastors vie to be as relevant as possible. Distressed jeans, brewery t-shirts, wireless headset mics and thin Bibles that they hold rolled up in their hand whilst preaching are a must. These churches also like to play U2 during their worship sets, leaving an opportunity for the pastor to explain that we still haven't found what we're looking for.

If you attend a relevant church you will likely encounter a video screen either behind the pastor or brandishing the pastor's face if he is actually preaching from another location (which means you are in a church satellite). On this screen of relevance they will probably show a video ushering in the pastor's sermon. This video will be "edgy." To Christian culture "edgy" means that it is loud, features choppy editing, and that any old people in the church (there aren't many to start with) might hate it to the point of writing a vigorously annoyed review on the comment card and possibly not return.


In every instance of relevance the church prides itself on its creativity and may even have someone titled Creative Pastor on staff. But with this creativity they are pretty much doing the same thing as every other relevant church, so it doesn't really end up being too creative.

Relevant churches often strenuously encourage marriage. Once someone is married they often encourage wives to quit their jobs and husbands to earn a certain amount of money, and they prompt everyone to breed. Relevant churches also have "lay counsel," which are counselors who are usually not certified or qualified by any standards other than they may have gone to the church or been a Christian for a long time. Relevant churches often strongly discourage anyone to seek therapy or counseling outside of their dubiously-qualified lay counsel. As a result, untreated postpartum depression is rampant in these churches and poses a distinct threat to the marriages and children the church urged people towards in the first place.
Posted by stephy at 10:44 AM

Is "Beautiful Day" another popular song?

I've never actually known a MHC service to be shorter than 90 minutes - though that was absolutely true of the church I went to as a kid back in Texas.

"These churches also like to play U2 songs during their worship sets, leaving a perfect opportunity for the pastor to explain that we "still haven't found what we're looking for.""

This would be a good sign that you aren't in a church at all. You're in some sort of glorified moose club trying to attract young people.

The writer of this blog would do well to actually find a church or a Christian before making fun of them.

I love how the name "Mark Driscoll" has become a punch line in so many circles.

I always feel that these types are using a different definition of "relevant" than I am.

you're critique about their lay "counseling" is right on, steph. as a qualified/licensed mental health counselor and theologian, i'm frequently horrified by the so-called counsel that women get in their churches. it is neither psychologically nor theologically sound! i wish more people were having this discussion.

Susan Hall, It also horrifies me! I received A LOT of that "wise counsel." I was discouraged from pursuing an acting career because "secular" college and theater are "worldly." Education is generally discouraged unless you study theology, (which I did for a time, with the hope of becoming a pastor's wife or missionary), or nursing. Wasn't until I went through a very long process of evaluating "sacred vs. secular" that I understood that my talent is God-given, and therefore, holy. I was keen on listening to my pastors for so long because my dad suffers debilitating depression. My dad though, is very wise. My pastor's counsel confused me, and I frequently distrusted my dad, and somehow concluded that he was depressed because he must not be Christian enough. They were content to let me assume as much.
Until I decided that I definitely wanted to finish school (the whole process took 8 years of quitting and resuming) and that my desire was not wrong, I had struggled with their "counsel." My dad encouraged me saying "Jesus taught us 2 things when He washed the disciples feet. He taught us to serve each other. But He also taught us that even if you walk with Jesus, your feet will get dirty. You don't need a whole bath, because you've been made wholly clean, and He will continue to wash your feet as they are guaranteed to get dusty as you walk. The world can't corrupt you. You don't need to fear what they call unrighteousness. When Christ said, 'It is finished,' He meant it. We're free." Best counsel I ever got, from a man who becomes weary with suffering, but loves Christ, and wrestles with Him with no thought of how church may perceive him.
I'm an actor now. I see a Jewish, highly qualified shrink. The Bible still fascinates and challenges me. Church still bugs me, but I'm working it out :)

The Christian search for relevance. Bitingly ironic post. Thank you.

I would like to ask everyone that has posted a nasty comment about Relevant Church if they have actually been in one and stayed for their service? Probably not and that is what ticks me off with you guys. You need to get yourself and your facts right before announcing stuff like this online. I go to Revelant Church and I absolutely love it. They love the Lord with all their hearts. I will be praying for you all.

Always thinking to do the same thing again and again , i am very thankful that i found this one..businesstidbits.net |

Hello, i am glad to read the whole content of this blog and am very excited and happy to say that the webmaster has done a very good job here to put all the information content and information at one place.sidecarsafari.net |

I really loved reading your blog. It was very well authored and easy to understand.saleahome.net |

Thanks combination of suitable and useful information and well-written sentences that will certainly entice your sense.There are so multiple comments here that are really entertaining and conducive to me thanks for sharing a link especially for sharing this blog.tucsoncomputer.net |

I must say that while reading your post I found my thoughts in agreement with the topic that you have discussed, which happens very rare.healthcareacoustics.net |

This topic is the one that I have been looking into from last 3 days and your insight is extremely useful. Thanks for sharing this information. zombiecomputersnyc.org |

You’ve got some interesting points in this article. I would have never considered any of these if I didn’t come across this. Thanks!.votebackhome.org |

This is such a great resource that you providing and you give it away for free.nonprofitva.org |

Hi, i think that i saw you visited my blog so i came to â€œreturn the favorâ€.I am trying to find things to enhance my website!I suppose its ok to use a few of your ideas!!travelpool.org |

From your blog it seems that you are en expert of writing article. Your contents are amazing and facts are true. I agree to all of your points that you have mentioned.decenturbanweddings.org |

It is really a nice and useful piece of information. I am glad that you shared this helpful information with us. Please stay us up to date like this. Thank you for sharing.Hail Home Repair |

Generally I do not read article on blogs, but I wish to say that this write-up very compelled me to check out and do so! Your writing style has been amazed me. Thanks, very nice post.Hotal Travel America |

Your blog is really nice. If I may share some insight, traffic studies on blogs show most people read blogs on Mondays. So it should encourage blogger to write new updates over the weekend primarily.Latino Technology |

I am very happy to find this site. I wanted to thank you for this immense read!! I absolutely enjoying every petite bit of it and I have you bookmarked to test out new substance you post. -Double Weight Loss |

I am gonna bookmark this page, thanks for info. I actually appreciate your own position and I will be sure to come back here. My Home College |

You have written the blog really well and writing on a theological fact is a big thing by the by. The church financing's necessity is really big for me but finding a right lender is my first priority before taking loan.

I am going to save your blog as bookmark. We are having church mortgage's necessity at present. Hopefully, Griffin Church Loans will help us.