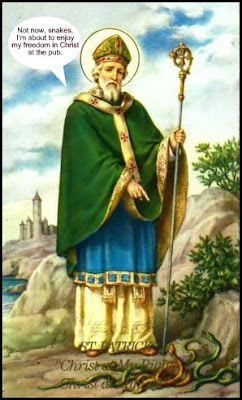 Visit a relevant Christian's blog today or check his Facebook status and tweets. He's sure to have written something about St. Patrick, probably something about him being a "rebellious teenager" before being sold into slavery and from there had a spiritual epiphany and ministered to the heathen Celtics before his untimely death. They'll be sure to include his breastplate prayer about God being before him, behind him, above him, in him and through him, all of which beg the question my five-year-old asked, "If God is everywhere, is he in my underwear?" That's the next question I'd like missional theology to broach.
Posted by stephy at 11:52 AM

You are great.Great blog you people have maintained there, I totally appreciate the work