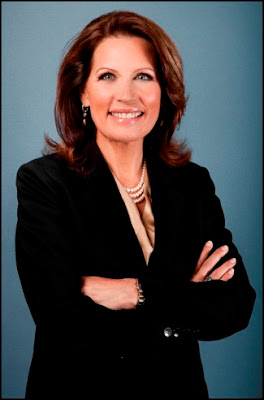 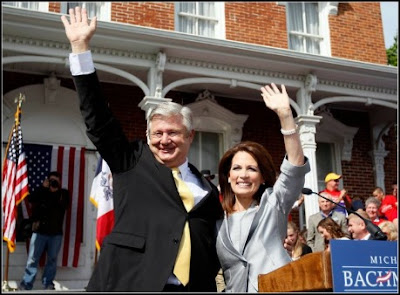 With Michele's MILFy goodness leading the way, Christian culture has renewed hope that this country can be wrested back from the organized resistance groups who have succeeded in undermining their cherished American values and have publicly ridiculed any reliance on their Creator as the sole source of all our national blessings and prosperity. Because to allow that wouldn't be constitutional at all, now would it.
Posted by stephy at 11:05 AM

So what happens when we are suddenly under the same theocracy that our founding fathers fled from?

...or are we already there?

Stephanie, you are my new favorite cultural critic. This is awesome.

Oh god I hate election years. It all turns into mud-slinging in the end, and no matter who wins, someone is going to bitch about it for the next four years. I guess I'm not a very patriotic American.

But I'm baffled what they do with the fact that she would be a WOMAN in LEADERSHIP over men...?!?

So, Bachmann is "advocating for America’s adherence to the Constitution"?
AWESOME!
The she will surely have NO problems with the First Amendment to the Bill of Rights: "Congress shall make no law RESPECTING AN ESTABLISHMENT OF RELIGION or prohibiting the free exercise thereof..."

This of course will mean that Christianity and Christian principles cannot receive preferential treatment over other religions in matters of government. This puts Ms. Bachmann in a further quandary, particularly with her vocal opposition to gay rights. The view that homosexuality is wrong is a religious one, not a social or ethical one. As such, unless she can make a logical argument why gay rights is socially and morally wrong, "it's wrong because the Bible says so" has no Constitutional support.

If Michelle Bachmann truly wishes to "bring America back to the Constitution", she will be surprised to discover that it was designed with the idea of preventing a theocracy; then she will have to decide which is more important: pushing Biblical rules into the government or adhering to the Constitution?

Not only did she homeschool her own kids (and frequently lament that the state of MN wouldn't let her homeschool her foster kids), but if you swing through MN's 6th district during election season, you'll see hoards of homeschooled children getting their social studies/civics credits by going door to door campaigning for her. True story.

She sounds like the perfect candidate for the religious right except for one thing: She has a vagina. I hate to point this out but someone has to and get har back in the kitchen.

Skeptigirl, If this article written by the head of Concerned Women for America is any indication, they're are already falling all over themselves trying to justify supporting a female candidate in light of all their demands for submission over the years. (If you've ever read anything else from CWA, I'm sure you're laughing at the irony.)

The thing that makes me the maddest? Evangelical Christians account for what, 14% of the population? If the rest of us would get out there and VOTE, she wouldn't have a snowball's chance in hell of getting her hands on our Constitution.

@Sarah - Why would I vote, when God's going to rapture us to heaven any moment anyway?

And from another side, why would I vote, when I play another round of Call of Duty?
/sarcasm

The tea-bagging Christians will allow a woman to lead the Country? What would Paul say? Shame, shame, you naughty Christians.

"Christian culture does not like discussing the Deist, Freemason and Unitarian beliefs of the founding fathers—and the Catholics and Anglicans are often put in the non-Christian box as well—nor that separation of church and state means anything besides keeping the state out of the church’s influence within public institutions, but that's another blog post for another day."

That's well and true, but why let the truth ruin a good story? Think of the homeschooled children!

"her presidential candidacy nomination has given them renewed hope that America might be reclaimed from the liberal left who are about to capsize this country with their secular socialist agenda. "

As a non American I am always amazed at the alarmist attitude about "secular socialism". From over here I'd say the US is so far from being a secularised socialist country that freaking out about it is like wearing a life jacket in the desert.

Michelle Bachmann is not a viable candidate and I guarantee she will completely fall out of contention by about February of 2012 (whether she will drop out is a different question.) Her current moment on the cultural radar has everything to do with her popularity among ultra-Conservative Iowans, who bear little resemblence to the national Republican electorate. She'll probably do well in the midwest, split the vote with Rick Perry in the South and completely tank in the coastal and western mountain states. I'm afraid Evangelicals are going to be stuck voting for a tepidly pro-life mormon or a Kenyan socialist with Balinese Mau Mau sympathies. My guess is that sometime next spring a whole host of evangelical leaders will, after much hand-wringing, proclaim that mormonism wasn't as bad as we initially thought (it's like Christianity with theologically-enhanced additives!) and that we should all vote for and "pray over" Mitt.

Michelle Bachmann has a decent shot at being the Republican nominee. If Perry and Romney both botch their campaigns badly enough, I think she's probably in the best position to take the lead from them.

Being a conservative, I'd vote for any of them before I voted for our current ultra-progressive president. And while I still can't stand it when they dodge tough questions to avoid being cornered (i.e. being "politicians"), I feel that Michelle Bachmann has actually been the most straight forward of any of the other candidates so far. With a few exceptions, she seems to answer most tough questions and accusations directly, rather than dodge and weave when people try to peg her with something. I like that.

But all that is to say this: As a Christian, I could care less about Michelle Bachmann's faith, her husband's clinic... any of that stuff. CC may go nuts over it, but this Christian wouldn't care if she were an atheist. As long as she really stands for the principles she espouses I would gladly vote for her, regardless her religious views.

I would love to see a Michelle Bachmann/Herman Cain ticket in 2012. Then the media would finally have to stop accusing conservatives of racism and sexism just because we opposed both Obama and Hillary. We're about policies and ideas, not about race or religion.

Christian culture does not like discussing the Deist, Freemason and Unitarian beliefs of the founding fathers—and the Catholics and Anglicans are often put in the non-Christian box as well

This is news to me. I knew many of them were paranoid about Roman Catholics, but I hadn't heard of any similar fears about Anglicans. Can you give any examples?

I mean alot of these folk love the hell out of C.S. Lewis (though they often give evidence of having only read him very selectively) and he was very Anglican, so what gives?

Maybe these posts will explain it better than I have time for right this second:

As a conservative/evangelical Christian, I can 100% promise I will NOT be voting for her. Because, I have a brain. Ron Paul all the way.

I guess since I'm reading this for the first time in November, it seems outdated. She's no longer so loved by anyone.

There's a whole lot on this blog that seems outdated.

[looks around at Christian culture in America]

Yep. Due for a secular socialist revolution ANY DAY NOW.

I'm afraid Evangelicals are going to be stuck voting for a tepidly pro-life mormon or a Kenyan socialist with Balinese Mau Mau sympathies.

I knew Herman Cain was weird, but I didn't think he was THAT weird. :)

Being a conservative, I'd vote for any of them before I voted for our current ultra-progressive president.

WHERE? WHERE?!? I want to find an actual progressive in our government so I can VOTE FOR THEM!

I am presuming you've never even glanced at an ACTUAL Liberal blog, since you've apparently missed the endless complaining about what a bland, centrist, compromising corporate sell-out Obama is. Seriously. The guy tries to be "Bipartisan"! (Apparently, he didn't get the memo that to the GOP, that just means "Twice as Partisan".)

We're about policies and ideas, not about race or religion.