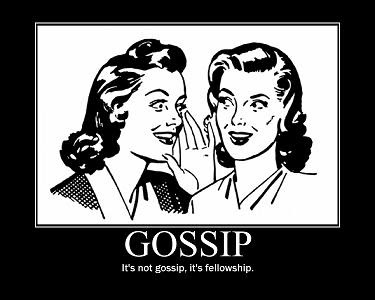 During a Bible study or fellowship group there comes a time (usually near the end) that you go around the circle and make prayer requests. This is an excellent time to air the dirt on absent friends under the guise of being lovingly concerned about their spiritual state.

The person being skewered is never present when others are confessing their sins for them. The prayer request often includes the phrase "they are just not walking with the Lord right now" and the group nods gravely while imagining which wayward deeds this person has been engaging in.

Other times more detail is given. "I just want to remind you to be in prayer for Heather and Scott. She found out he's been sleeping with her best friend so they need lots of prayer right now. And this has to be especially hard on them considering they just got through that whole lesbian daughter thing a few months ago."

94% of prayer requests concerning single people are for "purity" with their boyfriend or girlfriend. In a titilliating twist, some people personally confess such misdeeds in detail. This information is absorbed readily by all present and filed away in everyone's memories to "struggle with" later.