#112 CHRISTmas instead of Xmas 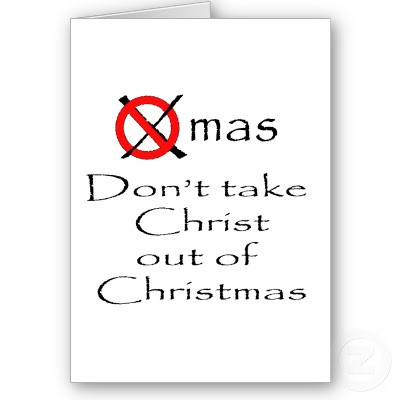 The campaign to override Xmas with Christmas is brought to you by the aforementioned Keeping Christ in Christmas movement. It's never more frenetic than at this time of year.

Pro-Christmas campaigners very much dislike Xmas. They will call you out if you use it and they are sure to write CHRISTmas on their Ugly Christmas Sweater Party invite (often in papyrus font, as above). Although X has been used for centuries as a sanctioned abbreviation for Χριστός (Greek for Christ), Christian culture has a sneaking suspicion this is really a calculated method to nudge Christ out of his own holiday.

Even their beloved C. S. Lewis endorsed the use of Xmas over Christmas for brevity's sake, but Christian culture insists that you should write the word in its entirety. The reasoning they commonly cite is that "Christ made room for you, so you should make room for him."

Their logic follows that writing five extra letters is the least you can do in exchange for his grisly crucifixion. And so once again, in a pitfall of Christian culture, a superficial patch job is substituted for inventory of the heart.

hehe... you used (inadvertantly it seems) an evangelicalism...
"inventory of the heart" at least I have heard that several times in my childhood church :)

Is it bad that I find the fact that the font is Papyrus the most offensive thing of all?

I had a bit of a tiff about this with an American friend...the thing I wished I'd said 5 minutes after she'd left was that it is, in fact, an abbreviation widely used by academic theologians: It is the greek letter Chi, the first letter of Christ! In the same way the greek letter Theta is used for God (theos).

Write My Essay For Me Cheap Uk said...

I do accept as true with all the ideas youíve offered in your post.