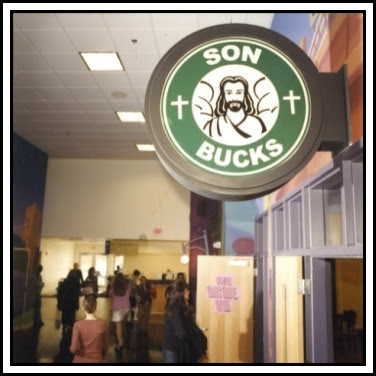 Christian culture is obsessed with church growth. Churches want badly to "get their numbers up," so some churches hire marketing teams to assess their fitness (their actual term) and tell them how to be culturally relevant. The goal is to get people in the door and make them come back. 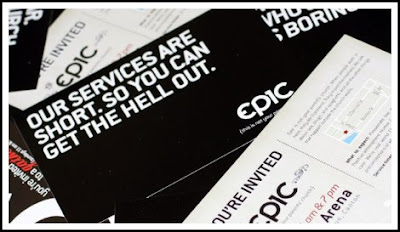 They put espresso stands in the lobby and get some ambient lighting so Kids These Days don't feel like they're in one of those churches full of dorks. They don't want to be like those churches with fluorescent overhead lighting cause that's super lame. Those churches sing hymns and their pastors wear suits, and church marketing statistics say only old people like those. The church marketing stats also say that people decide if they'll come back to a church within the first three minutes of their visit, so they've really gotta work those first three minutes. 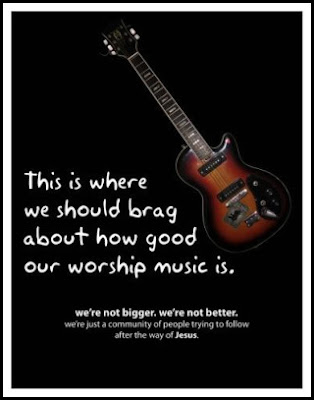 They want to make their church feel like you're at a concert, so they have a stage lighting ministry and play the music really loud. The pastor tries to look cool (as we've discussed here and here) and uses high school jargon and so he can be relevant. And he wants the worship band to be extra rad. The worship leader tries to get a Fleet Foxes/The Fray/Death Cab vibe going. He holds auditions for the worship team and picks the ones with flat-ironed hair and guyliner. It's important that they look sincere when they sing, but scarves, vests and grommet belts help. Okay, so. What are some edgy names for an epic sermon series? What will get the most people in the door? We have to get our numbers up and grow this sucker or else it means God isn't blessing our ministry! Numbers! Tithing! Relevance! U2! Discipleship models! The reformation! Leadership! Authentic! Contextual! Twitter! iPhone! Sick website! Innuendos from the pulpit about sex with my wife! In the world, but not of it! 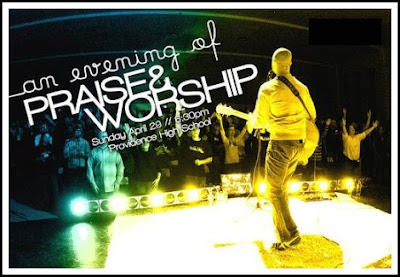 Their mission statement sounds solid and they say they're all about Jesus but some churches seem awfully impressed with themselves. Being hip and raising money for new buildings seems like the focus instead of being broken by the message of the Gospel. But if Jesus loved the sick and the poor and drew near to the brokenhearted, and if he was a servant to the least and walked into their lonely worlds, and if his love went to their dark corners when they did not expect it or even ask for it, is he harder to find in churches where image is king?
Posted by stephy at 3:36 PM

Dropped by a Hillsong 'evening of praise and worship' out of curiosity because I heard it was a Crazy Laser Spectacular, and you pretty much described the whole experience head to foot. Particularly the Cool Hip Pastor and the tithing. Oh god, the tithing. Our Moral Obligation to Give to the Church was a 15 minute sermon in and of itself. Singularly bizarre experience.

This is the part of xian culture that makes me feel like vomiting into my hands 18 times. So much so that I blogged about it once, too.

It effects good on a child if you take your child to churches with you. It's a part of theological education in one's life which leads to be a child a good person and so church loans lenders offer loans churches to develop.

I literally loved the style of your writing. Churches may often need church loans. To get informed about church loan lenders directory is the better option rather than broker for church loan in USA.

Excellent and useful information, thanks for the list Tutuapp APK

Really great content, thanks for sharing and keep posting more article! This website article is really excellent and interesting. I will visit your site again.
industrial roofing contractors in alabama

The truth is, every soul from birth has innate faith. And bringing this to its highest fruition in consciousness, requires personal inward travel, not outer conditioning. bible diet

I’ve read some good stuff here. Definitely worth bookmarking for revisiting. I surprise how much effort you put to create such a great informative website. business names ideas

This had to be one of the hardest things God had to do. He turned his back on his only begotten son. nigerian church