#149 Calling the lobby the narthex 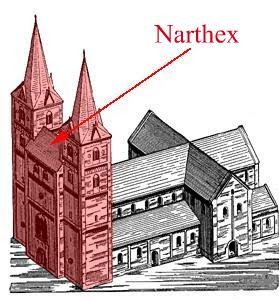 During church announcements the pastor will reference the narthex ("Information on our outreach programs is located in the narthex," etc.) and you must infer its definition from the context. Even the warehouse-iest of church buildings call their warehouse-y lobbies the narthex as it perhaps lends a bit of elegance, like saying fo-yay instead of foy-yer (the latter pronunciation being common in the Bible belt).

According to Wikipedia the narthex is the entrance or lobby area located at the far end from the church's main altar and the name dates back to the Byzantine era. This is news to me as I've lived my entire life thinking that narthex is named after the north (narth, same difference) exit (hence the -ex) even if the exit does not face north. It's like when I finally learned the wind chill factor is not actually the windshield factor, and it's not measured by sticking your face out the window next to the windshield to see how cold it is. But I digress. How should I end this? Narthex is a hilarious word, and that's the moral of the story.
Posted by stephy at 4:28 PM

"the wind chill factor is not actually the windshield factor"

"porch at the west end of early churches" (used by penitents not admitted to the body of the church), 1670s, from Late Greek narthex, in classical Greek "giant fennel," of unknown origin. The architectural feature allegedly so called from fancied resemblance of porch to a hollow stem. The word also was used in Greek to mean "a small case for unguents, etc." According to Hesiod ("Theogeny"), Prometheus conveyed fire from Heaven to Earth in hollow fennel stalks. Related: Narthecal.

It is the right blog for any person who wants to discover more about this particular topic. You know so much its almost complicated to argue with you (not that I truly would likely want??aHa). You definitely put a brand new spin over a topic that’s been discussed consistently. Great stuff, just good! auto glass