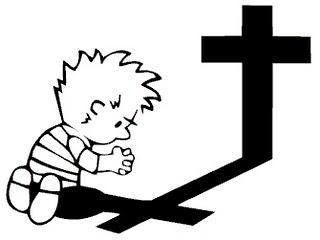 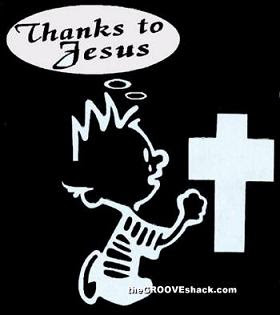 Maybe Christian culture feels that if Calvin is shown praying instead of peeing then it's okay to nick his image, since it's for a good cause. Maybe Calvin is praying forgiveness for pissing on everything. But why Calvin, of all cartoons? Is it a veiled reference to John Calvin? Or a far-fetched reference to C.S. Lewis? Calvin's mean teacher is named Mrs. Wormwood and Wormwood was a character in The Screwtape Letters and Christian culture reveres C.S. Lewis, but that's about four degrees of separation and this is getting complicated. Would the person who had the idea to make Calvin-cross-stickers please speak up? We'll grant you immunity if you'll just explain yourself.
Posted by stephy at 4:26 PM

Bill Watterson did explain his name choices in the foreword to one of the "Calvin and Hobbes" books (I forget which one). Calvin is, in fact, named after John Calvin, who believed in predestination (and Calvin is a megalomaniac who, among other things, speaks of himself as "boy of destiny"). Hobbes is (of course) named after the 17th-century philosopher Thomas Hobbes (who had a dim view of humanity, much like the stuffed tiger, for all his easy-going nature). And Miss Wormwood is indeed named after the junior demon in "The Screwtape Letters" (though I don't remember Watterson expanding on that).

And your blog is fun to read.

I remember when these stickers started showing up. Growing up in a smaller town where G-d (can't write it out, that would be blasphemous!) was very important, I'm pretty sure we were the target demographic.

Before that, the Calvin peeing sticker was far, far more pervasive than it is now. You could see him everywhere, pissing on Iraq (first Gulf War), pissing on #3 (before his death) and Fords, Chevys, and just about anything else that redneck hicks seem to really enjoy getting their hate on about.

And then one day, the Calvin praying stickers started appearing. I think it was much like the Christian t-shirts and whatnot that co-opt popular culture and then turn it into some kind of message. "Oh dude, totally sweet Reese's .... I mean Jesus shirt. You totally tricked me! I thought you were just another lost consumer of secular culture, but you're really a Jesus freak!"

I think in the beginning, the praying Calvin wasn't a bad message. The Calvin stickers had gotten really played out and rather tiresome, and it was kind of nice to see him doing something wholesome instead of peeing on everything. However, in retrospect, the message has been really lost now and there's something really wrong about trademark and copyright infringement in the name of the Lord.

I'm amused that people will put these on their cars knowing that it's an unauthorized image of Bill Watterson's creation. Stealing, in other words. But it's totally okay to steal intellectual property if doing so shows people that you're a Christian person who wouldn't ever do anything like steal...oh, wait.

Hi Stephy, what an awesome article you gifted to us! This was an amazing and significant read and experience for me surely. The Stuff Christian Culture Likes you focused in this post was incredibly remarkable. Thanks to Jesus I found this thoughtful resource while searching about 316Tees, the Veteran-owned Christian Apparel brand inspired by Truth. The Calvin & Hobbes cartoons and the bumper sticker was able to express the inner meaning of the peace, love and faith. I appreciate this brilliant job and of course would like to leave my hearty thanks to you for sharing online.