In an attempt at reverse psychology and to perhaps lure you with their hilarity, Christian culture signs things with Satan's name to show you that, obviously, you should do the opposite of what Satan says. Satan bought a billboard ad? As if! That church is hilarious! And, Satan hates it. I'd better go there. 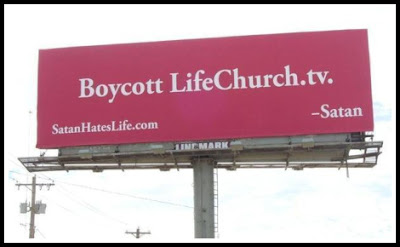 You'll notice this move is artfully engineered to plant a seed of doubt in your mind. What if Satan really doesn't want me to go to that church or do that thing that the billboard says? I'd better NOT LISTEN TO SATAN THEN, just in case. 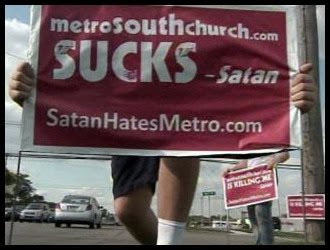 Your affectionate uncle,
Screwtape
Posted by stephy at 4:04 PM

Hahaha, love the C.S. Lewis reference. I remember informing my old pastor that I read the Screwtape Letters twice, so I am sure that the devil thoroughly deceived me, which is why I am no longer a Christian. Teehee. I wish I could have known old Jack in person. He was probably such a douchebag.

Why do 'Christians' keep saying that atheists love Satan or worship Satan or the like? Satan is a Christian saint - nothing to do with any other religion or with atheism. Even to Jews he is the opposer (or critic), not the torturer-in-chief.