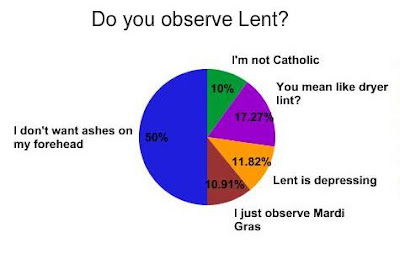 Evangelicals don't do Lent. If you ask one of them what Lent is even about, there is an excellent chance that they won't be able to tell you. To them it's a Catholic thing.

Lent has been a Christian tradition since the second century that for some reason has fallen out of favor with the evangelicals. It is observed in the Protestant realm primarily by Anglicans, and the Lutherans, Methodists and Presbyterians also pay attention to it. But Baptist, Bible and non-denominational churches pay it no mind. (Curiously, the denominations that do not observe Lent are the same ones that are more likely to joke about the wedding night during a wedding ceremony, and vice versa. This is an extremely random yet accurate correlation.)

Lent is a somber season to be sure, heavy on seeking and self-reflection and getting rid of distractions, that eventually culminates in the celebration of Easter. Now, Easter is something the evangelicals will get behind. They celebrate the living hell out of it.

I wish they'd celebrate Yom Kippur. They have much to atone for.