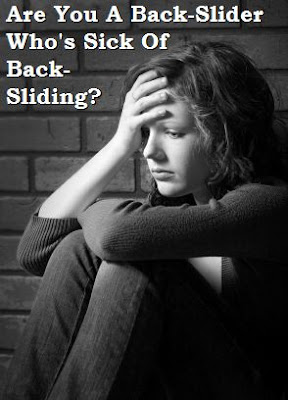 This word isn't used in many contexts outside of Christianity with the prominent exception of a Rancid song. Christian musicians who question their beliefs seem to gain the most notoriety. Nefarious musical backsliders include Amy Grant, Bob Dylan, Kris Kristofferson and David Bazan.

Those who admit to faltering faith typically receive a healthy dollop of rebuke and admonition from the Christian culture, followed by an urging to "do what's right." The notion that they are doing right by themselves and by God in being honest about their misgivings has little if any validity in Christian culture. But if the Bible is true then the God of the Bible can withstand questioning and even demands it. He blessed Jacob after Jacob wrestled with him and he didn't promise to spit his naysayers out of his mouth, only the lukewarm. Christian culture doesn't know quite what to do with this. Be warned that if you express your doubts or struggles to someone enmeshed in Christian culture these will be met with disapproval and handled with severity.
Posted by stephy at 4:39 PM

I stumbled across this one years ago in an attempt to find something that questioned CC - it's been fun rereading too!