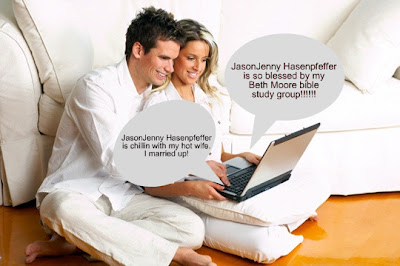 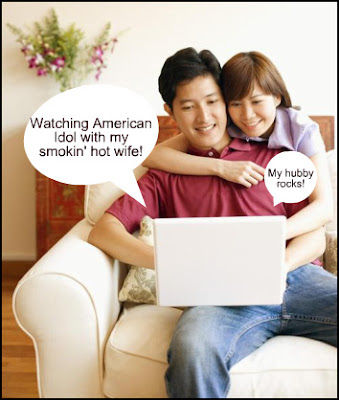 People who have shared Facebook accounts tend to forget we can't tell who's updating. Jeremy-N-Wendy just updated their status, but which one is it, Jeremy or Wendy? Guessing is required. When their status is something like "Jonathan&Sarah is counting down the hours left in the Obama administration" that could well be either Jonathan or Sarah. It's easier when a gender-specific activity is mentioned. Stati* like "ToddAndMelissa The 'Hawks really cleaned up in the draft" and "Josh&Heather is harvesting my peas on Farmville!!!!" require zero guessing as to which spouse made that update.**

Sharing an email address is another prevalent internet trend in Christian culture. This will also be explored in a future post and it will also have no satisfying conclusion.

**In Christian culture it's unlikely the wife would be playing fantasy sports or that the husband would confess to playing Farmville. Outside of Christian culture you may need to wonder, but within it, gender roles are pretty pervasive.
Posted by stephy at 4:41 PM

Hilarious. And so true. I have a couple of shared FB friends, one (or is that two?) are not only Christians but missionaries, which probably makes sense in that SCCL way. It always annoys me a bit when they (he? she?) posts and I never "like" or comment on their page. You know, just to show them.

Theory: they do it so they never have to wonder whether or not their spouses are hooking up with other potential affairs on fb. It's a safeguard against cheating (or at least against flirting).

Pretty sure it has to do with the whole "we are now one, two halves of a whole" thing. I really hate when people do this.

Facebook isn't a temptation to sin for everyone, but it is for many, primarily because it breeds discontent with one's own life/relationships. I have a facebook account, but I primarily use it as a phonebook/communication tool. If it did breed discontent in my life, I would need to get rid of it. Why? Because life isn't a contest to see how much temptation we can put in front of ourselves without sinning. And refraining from sin isn't about brownie points with God, it's about avoiding destruction that always results from sin unchecked. Ultimately true fulfillment comes from seeking to have as much of God as we can in our lives through a relationship with Jesus Christ, because nothing and no one else compares to Him in satisfaction or fulfillment, and without Him we will be separated from God forever. Jesus said (paraphrased) that if your hand (or eye) offends you, cut if off/put it out - it's better to live without one of those body parts than to have your whole body thrown into hell. I read a lot of comments (to this post) about how if you eliminate something from your life that's a conduit for sexual/emotional immorality or unfaithfulness, you don't trust yourself or others, and that shows weakness. The truth is, we are all inherently sinful and weak. Surrendering one's life to Christ requires that very admission, and only pride begs to hold on to the false notion that we are inherently good. If social media creates temptation, there's no need to throw fuel on the fire by continuing to have unabated access. If I have a problem texting and driving (which I do), the best thing for me (personally) is to put my phone out of sight when I drive. I don't have to prove to myself that I'm able to resist the temptation by taping it to my steering wheel. I want to take the precaution of limiting access, simply because I don't want to die in a car accident. Call me weak, but it makes me a safer driver.

I don’t care about my condition, so until I am told to seek help, I will not do it, and if you start to feel guilty, then there is a blog about why do we feel guilty, and psychotherapists will help you.